From M59Wiki
Jump to navigation Jump to search

Guilds are basically a group of players with the same interest. Being a guild's member enables you to access guild halls, which can be a secure place against player killers or enemy guild players. Also, guild halls may offer every member a shared storage (chests).

To be able to form a guild you will need some Shillings in your inventory, you must not be a member of another guild and you need two other players to join your new guild within the next 36 hours. All of these players, including you, need to stay online for 3 more hours (normal guild) or 6 hours (secret guild) until the guild becomes legal. If any of this fails, the guild will disband.

Frular in The Guildmaster's Hall, located in South Barloque is the guild registrar. He will gladly create a new guild for you. Visit him and use your 'buy' hotkey, or simply write 'buy' into your chat bar. Once the guild has been created, you can manage it using the 'Guild' option in the game client's menu. 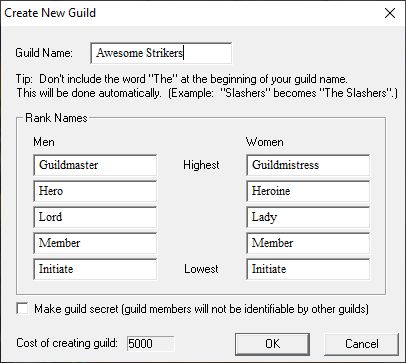 This lets you define the guild rank names each member can obtain. It also lets you choose whether the guild shall be a secret one.

You can access your guild's details from the 'Guild' menu entry of your game client. 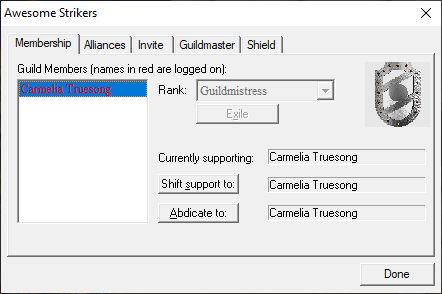 On the memberships page you can edit your members and their ranks. Also, you're able to 'vote' for a member to be the new guild master, disband members and hand over your rank to another member. 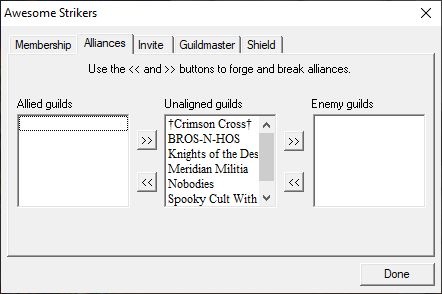 You can define other guilds to be allies of yours or to be enemies. Members of a hostile guild may be attacked while the guild is defined as an enemy. Being a member of an allied guild enables you to use the other guild's Guild Halls, and the other guild may use yours. An alliance is valid if both of the guilds accept the other party as an ally. 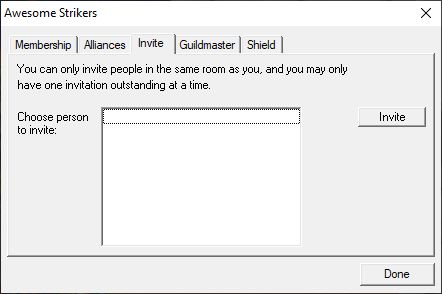 The invitation screen let's you choose a player you would want to invite. This player must be in the same room as you, must not have left a guild short before and have at least 30 Hit Points. Only one invite may be done at one time. Once you sent the invite, the new applicant gets an Invitation letter. Once he uses this letter, he joined the guild successfully. The invitation is only valid for 5 minutes. 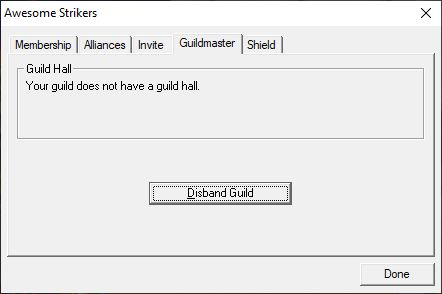 The guild master overview enables you to disband your guild and have a look into your Guild Hall details. 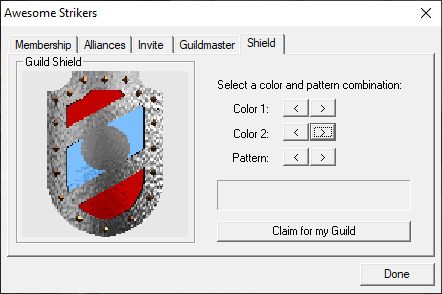 The shield overview let's you define your guild's Herald Shield look and it's colors.

Frular gadly accepts Shillings from every member to keep the guild up and running. The guild's rent is managed by himself and he will remove the costs each 6 minutes from the account. Calulation of the guild cost is as follows: